2017 ABBA SPONSOR OF THE YEAR AWARD 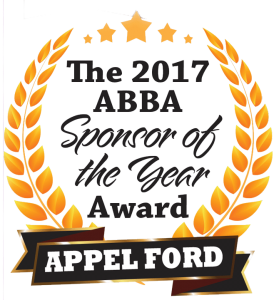 Appel Ford of Brenham, Texas will receive the 2017 ABBA Sponsor of the Year award during the ABBA Membership Meeting in Houston, Texas March 8, 2017.

“Sponsor of the Year recognition is given to individuals or organizations for assisting the American Brahman Breeders Association to give opportunities to our members,” ABBA Executive Vice President Chris Shivers said. “Year after year, Appel Ford has provided vans free of charge during the rodeo.”

The shuttle van service provides ABBA members and international guests with transportation to and from the Houston Livestock Show and Rodeo’s Brahman activities. Without it, some people would not be able to attend.

“Also, back in the early 2000s, the dealership donated a vehicle to the association for the ABBA executive Vice President to drive,” Shivers said.

Before he passed away, ABBA member Ken Hughes was an owner at Appel Ford. Ken and his brother, Glenn, were well-known F1 producers. Ken had young family members (nieces and nephews) who participated in the junior programs.

Appel Ford has generously continued to support the association since Ken’s passing in 2012.