FEED EFFICIENCY AND HOW IT’S MEASURED

Editor’s Note: During the last ABBA Performance Committee Meeting, Gustavo Toro of the Genetic Development Center in College Station, Texas gave a presentation discussing future performance tests. His speech touched on subjects including feed efficiency and residual feed intake. TBJ felt like this article would give ABBA members and Brahman enthusiasts unfamiliar with the subject matter a good working knowledge of feed efficiency concepts and technologies. It is published with the permission of The Samuel Roberts Noble Foundation.

A sustainable beef industry is a balanced equation with ranchers and farmers producing a wholesome product that meets consumer demands, ensures animal well-being, stewards agricultural resources and enables operational profitability. As an industry, we have made many strides guaranteeing animal welfare and meeting consumer demands through selection for increased growth rate with acceptable yields and quality grade. While these performance characteristics have improved, feed efficiency is now the focus of many producers.

A successful businessman, farmer or rancher looks to increase profit by efficiently delivering a product that is in demand by the consumer. Beef producers are very good at delivering a wholesome product, but how efficient are the cattle? What is efficiency? How do we know if our animals are efficient? Have we achieved increased growth, rib eye area and marbling at the expense of efficiency? These are increasingly significant questions as input costs to the beef production system continue to increase. What is efficiency? Webster® defines efficiency as a “way to determine an effective operation as measured by a comparison of production with costs.” In a business, efficiency is a major contributor to profitability and is usually achieved through a decrease in inputs, increase of outputs or a combination of the two. The business of beef production follows the same principles to profitability, but measuring the efficiency of an integrated beef operation is difficult due to variation in cattle class (growing, breeding, etc.), breed differences, reproduction status, lactation ability, and difficulty in assigning input costs to individual animals. Many of these factors have been studied in depth, but one of the most often overlooked efficiency measures in a beef operation is feed efficiency. It is estimated that up to 75 percent of the total cost of beef cattle production is feed (Basarab et al., 2002). Therefore, it is critical that this production parameter be more closely monitored.

What is feed efficiency?

Why is feed efficiency important?

While it is interesting to compare average feed efficiency of different species, we also know that dramatic differences exist in feed efficiency among individual animals within a species. In fact, Basarab et al. (2003) found that there was as much as an 8-pound difference in feed consumed per day for steers that gained similarly. In practical terms, this difference is very costly to the producer. This 8-pound difference in feed intake would amount to half a ton of feed ($150) in a 120-day feeding period.

How is feed efficiency measured?

To measure feed efficiency requires the measurement of feed intake and gain. Without automation, feed intake can be an expensive and often laborious trait to measure. Feed intake is relatively easy to estimate for a pen of animals; however, in this case, efficiency can only be calculated for the pen as a group. 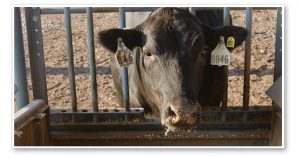 Early studies to determine individual animal efficiency were primarily restricted to university research because of the need to use metabolism crates. These crates were designed to hold a single animal and required the animal to be hand-fed two to three times per day. An advantage of this system was that it enabled the researcher to not only collect feed consumed, but also collect animal waste. While this allowed for precise animal efficiency calculations, results may be influenced by the lack of animal socialization and restricted behavior. In addition to being very costly, the isolated animal’s behavior may be altered which could result in unnatural feed consumption patterns, leading to faulty efficiency measures.

Over the past 20 years a few technologies were used in research which attempted to measure individual animal feed intake in a pen environment. One system, manufactured by American Calan, is still used in research environments today. The Calan gate works via an electronic collar that the animal wears around its neck. This collar activates a trigger located in a door associated with the feed bunk, and, therefore, the animal can only consume feed from that bunk. Calan gates were a major improvement over metabolism crates because they enable animal socialization in a feedlot setting. However, feeding behavior was still affected by restricting where an animal could eat, feed needed to be pre-weighed and added by hand, and at the end of the day remaining feed needed to be weighed to determine what was actually consumed. While this system was an improvement, it still resulted in modification of normal animal behavior and required a significant amount of labor. Due to the inability to measure environmental effects like snow and rain, these systems needed to be installed in a barn or covered area, increasing the costs of measuring feed intake. 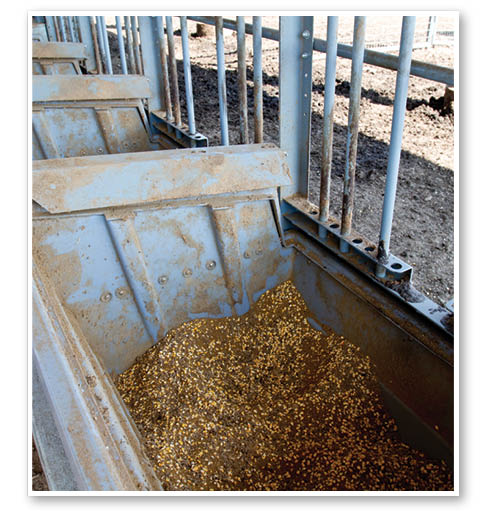 In 2000, a Canadian engineering company developed the GrowSafe Feed Intake and Behavioral Measurement System (GrowSafe). Every animal is equipped with an electronic Radio Frequency Identification (RFID) ear tag. This “smart name tag” uniquely identifies each animal. An RFID-equipped trough is suspended on two load cells that measure with 10 gram resolution. The tag and trough measure feed disappearance every second. The system can be used outdoors in any environment This system runs continuously and does not require any specialized feeding equipment or labor. Therefore, the animal’s normal feeding behavior is not altered by human interaction nor is an animal restricted to a specific feeding location. With this system, we are now able to accurately measure the amount of feed an individual animal consumes on a daily basis in a commercial environment and compare that to its growth performance to determine efficiency.

How do we use feed efficiency?

The identification and selection of efficient animals is critical to beef cattle profitability. Unfortunately, identifying these efficient animals has been difficult. In the past, improved feed efficiency was assumed to be a by-product of selecting for increased growth rate. However, this method may be biased in that faster-growing animals are usually of larger mature size and, therefore, have increased maintenance requirements. Ideally, feed efficiency, independent of growth rate and mature size, should be measured and included in a matrix of traits that all influence profitability.

What is Residual Feed Intake (RFI)?

Now that we have the technology to accurately measure an animal’s feed intake in a commercial environment, the industry needs to use the best metric to describe feed efficiency. Traditionally, the use of feed-to-gain ratio defined an animal’s efficiency. For example, “It takes 6 pounds of feed to produce 1 pound of gain.” Unfortunately, it is difficult to compare animals using feed-to-gain ratio as it can be significantly affected by animal body size, stage of growth and even breed. Therefore, to help overcome these obstacles, researchers have developed a measurement standard termed “Residual Feed Intake.”

Residual Feed Intake (RFI) is defined as the difference between an individual animal’s actual feed intake and its predicted feed intake. Predicted feed intake is based on the actual measured performance and size of the animal, compared to contemporaries. Koch et al. (1963) first suggested this method of evaluation because it reflects differences in an animal’s feed use for production and body weight maintenance. This means animal efficiency can be measured independently of mature size and growth rate, and allows animals in a contemporary group to be ranked from most to least efficient. Therefore, an animal with a negative RFI value, meaning it consumed less feed than was predicted, is more efficient than an animal with a positive RFI.

Selecting breeding animals based on RFI is only valuable if the phenotype is due to genetics that are heritable. That is, if the genetic value of an efficient animal is not transmitted to the next generation, then the breeding value of that animal for feed efficiency is minimal. Therefore, several studies have been conducted over the years to determine the heritability of RFI.

Research into RFI heritability indicates that it is dependent upon breed, but, in general, the trait is moderately heritable (0.16 to 0.43). These numbers mean that improvements in efficiency can be obtained through selective breeding using animals evaluated for RFI. Importantly, it has been found that improvements in efficiency (RFI) do not affect other performance traits such as average daily gain or weaning weight. Therefore, the utilization of GrowSafe technology to accurately measure individual animal intake and performance on large numbers of bulls will enable the industry to identify desired genetics.

Does selection for RFI really help?

There have been several studies conducted over the last five to seven years investigating the effects of RFI on individual animal performance, and most of these evaluations were conducted with the GrowSafe System. So does RFI identify a more efficient animal? Arthur et al. (2001) found that after two generations of selection for lower RFI, steers and heifers consumed 11 percent less feed, but had similar weights and performance to their randomly mated contemporary groups. In addition, these authors also determined that if divergent RFI lines were selected, daily feed consumption decreased by an average of 0.5 pounds per day for each year of selection. Interestingly, most studies find that an improvement in RFI has little or no effect on carcass fat, mature animal size and average daily gain (Herd and Bishop, 2000; Richardson et al., 1998; Herring and Bertrand, 2002).

It has been reported that 50 percent of the feed used in a beef production system is used to maintain breeding animals (Lamb and Maddock, 2009). Improving feed efficiency of brood cows would obviously have a significant impact on overall efficiency. Can RFI be used to improve cow efficiency? Several pasture-based studies have been conducted to evaluate animal performance for cows having different RFI values. In general, most studies have found that cows with lower RFIs are heavier than their counterparts on similar forages (Herd et al., 1997, 2005; Herd et al., 2003; McDonald et al., 2010). More recently, Meyer et al. (2008) utilized the GrowSafe Feed Intake System to evaluate both low- and high-RFI cows. In this study, no difference in cattle weight gain was detected, but low-RFI cows did consume an average of 16 percent less forage.

Equally important to growth in females is reproductive performance. Relatively little research has been conducted in this area, recently Lamb and Maddock (2009) reported the effects of RFI on reproductive performance in Brahman first-calf heifers and multiparous cows. As in the previous study, body weights did not differ between the two groups, but the more efficient animals developed a corpus luteum (CL) and exhibited estrous an average of 13 days earlier than the less efficient females. This data seems to indicate that selection for low RFI could shorten postpartum intervals.

Feed efficiency is a critical aspect of efficient beef cattle production and profitability. Now that we have the tools to better determine which animals are more efficient, it is incumbent upon scientists and producers to develop producer applications for this data. The sustainability of the livestock industry is reliant on farm and ranch profitability. 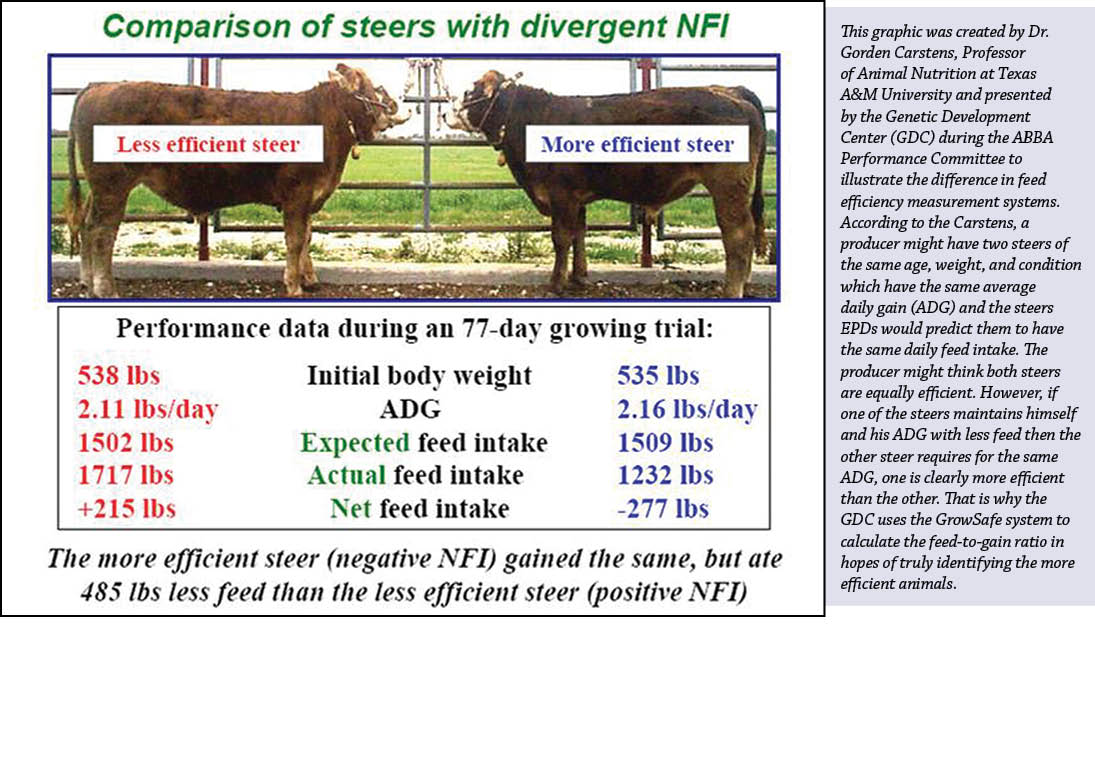