For years, Bos indicus influenced cattle have received a bad rap for their less-marbled beef product. However, as the push for healthier foods has risen in recent years, this provides opportunity for Bos indicus breeds to market a leaner product that is appealing to health-conscious consumers. Beyond the simple fact that the beef from these cattle breeds is typically leaner, research at the University of Florida shows the fatty acid composition of the marbling is more favorable in terms of nutritional value.

The fatty acid composition of meat (muscle and adipose tissue) is important because it contributes to the nutritional value and it affects various aspects of meat quality, including shelf life and flavor. Nutritional value is determined primarily by the ratio between saturated fatty acids and polyunsaturated fatty acids in meat. Low fat diets have been recommended on the premise they would decrease the risk of developing several cardiovascular diseases and, therefore, improve human health. As meat contains a relatively high amount of fat, some people followed the prevailing recommendation and cut down on their meat consumption. It turned out that this simple message is actually wrong. Detailed research carried out in the last decade shows that the total amount of fat in the diet, whether high or low, is not really linked with diseases. What really matters is the type of fat in the diet. What is becoming clearer is that bad fats, meaning trans and some short-length saturated fats, increase the risk for coronary heart disease as well as other diseases, while good fats, meaning mono- and polyunsaturated and longer-length saturated fat, lower this risk.

Several factors in beef production affect fatty acid composition, including breed and diet. Breed affects the fat content of meat and fat content itself is a factor determining fatty acid composition. If beef producers could identify cattle that have more beneficial fatty acid profiles, they could enhance the nutritional and health value of beef. Such beef could increase profit to producers because consumers likely would be willing to pay a premium for beef that consistently has a high nutritional and health value. In addition, this nutritionally enhanced beef would likely increase overall demand for beef and ensure continued growth of the beef industry.

Over the last few years, researchers have identified several genes that regulate the fatty acid composition of beef. This, along with the natural variation existing in many breeds of cattle, suggests that fatty acid profiles in beef could be improved through genetic selection. The University of Florida Department of Animal Sciences is currently conducting research on Bos indicus influenced cattle to determine the extent to which genetics influence fatty acid composition and to develop genomic tools for identification of genetically superior animals.

The cattle in this study are part of the University of Florida multi-breed herd of cattle that range from 100% Angus to 100% Brahman. Cattle were classified into six different groups based on their expected Angus and Brahman breed composition. Based on the Angus composition, the grouping was as follows: 1 = 100 to 80%; 2 = 79-65%; 3 = 62.5% (Brangus); 4 = 59 to 40%; 5 = 39 to 20%; 6 = 19 to 0%. When steers reached 1.27 cm of fat thickness over the ribeye, they were transported to a commercial packing plant and harvested using established USDA-FSIS procedures. A steak 2.54 cm thick from the Longissimus dorsi muscle between the 12th and 13th rib was sampled per animal. Steaks were transported to the Meat Science laboratory of the Department of Animal Sciences at University of Florida, vacuum packaged, aged for 14 days from the harvest date at 2°C, and then frozen at -20°C. A thin shaving of each steak trimmed of external fat and connective tissue was powdered and analyzed at Iowa State University for fatty acid and mineral composition.

These findings could be great news for producers raising Brahman-influenced cattle as our preliminary data shows they may have an advantage of a healthier fatty acid composition. In this dataset, nutrient profiles of beef were not uniform across cattle, and variation in fatty acid composition is partially attributable to genetic factors. Furthermore, part of this variation can be credited to Brahman percentage, allowing for new opportunities for cattle producers utilizing Bos indicus influenced breeds.

This may open the door for producers utilizing Bos indicus breeds to appeal to health-conscious consumers through marketing beef that has a more desirable fatty acid composition. Additionally, researchers will continue working towards finding genetic markers that will allow producers to identify and select for animals that will produce beef with higher percentages of polyunsaturated fatty acids and lower percentages of saturated fatty acids. Now more than ever, beef producers are exploring new ways to market their product. Beef with an improved nutritional fatty acid profile creates a product marketable to consumers who place value on health attributes over high marbling. Rather than Bos indicus influenced cattle taking a hit for those cattle that don’t reach the choice mark, producers should market this leaner product for its favorable attributes. Focusing research and promotion efforts towards nutritional and health benefits of beef could result in a very profitable future for Brahman-influenced cattle producers. 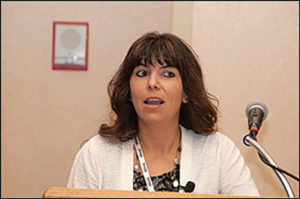 By Sarah Flowers, Heather Hamblen and Dr. Raluca Mateescu – Department of Animal Sciences,
University of Florida
Flowers and Hamblen are graduate students in the Department of Animal Sciences at University of Florida working on their M.S. degree with Dr. Mateescu.
Dr. Mateescu is an Associate Professor of Quantitative Genetics and Genomics. She joined the faculty at Florida in 2014 after serving on the Animal Science faculty at Oklahoma State University for seven years. She received a B.S. degree in Molecular Biology and Genetics from Bucharest University, Romania and received her M.S and Ph.D. in Animal Breeding and Genetics from Cornell University.
She recently was awarded a grant from the International Brahman Research Foundation to help finance her work with Brahman cattle. Since most of the cattle herd in Florida are Brahman-influenced, Dr. Mateescu’s research centers around Bos indicus animals, focusing on meat quality, meat healthfulness and beef cattle thermotolerance.
Look for Dr. Mateescu to present her work entitled, “The Role of Brahman Cattle in Global Protein Production,” at the International Performance Retreat in Floresville, Texas October 19-20.