BY DR. ALBERTO BANUET. Let me start by stating the obvious, the sale was a lot of fun and an eye-opening deal. The ancient idea of connecting sellers with buyers actually worked under the TMEC flag of the North American Free Trade Agreement. 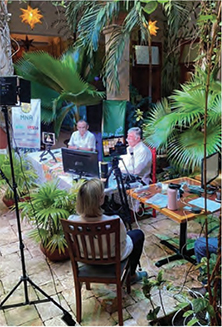 The idea all started on an extremely hot afternoon while enjoying the view of a bunch of Red Brahman cows in the pasture that were royally bred. I was trying to figure out how in the world I was going to sell their calves at a decent price in this depressed market… then it struck like lightning as I thought, ‘The playing field has finally been leveled!’ Now we can offer our genetics in a much more practical and professional manner to a huge crowd that under any other arrangement would never get to see what you and I have planned and worked our tails off for decades to produce. Shows are fine, but not enough in my view. This idea about a sale sounds easy, but it was a lot of work.

Ultimately, it all came together, cattlemen from the United States, Canada and México would consign just good solid genetics aimed at producers in México and Central America. After all, these commercial calves would eventually find their way into an American feedlot, so it is in everyone’s best interest to produce good beef.

We decided to offer some guidance concerning the issue of producing beef cattle and Gustavo Toro from ST Genetics was really helpful. He gave us a 10 minute conference in Spanish about feed efficiency that everyone enjoyed.

As for the sale, we published tons of information, made hundreds of calls, and did a lot of explaining on how this sale was to work. We hoped for the best, because it was a whole new deal and marketing experience for sellers and buyers.

A bunch of good willing people were involved, and they posted videos on Facebook about the importance of this sale. It was particularly nice of Wade Shafer, the American Simmental CEO, Bruce Holmquist, the Canadian Simmental Association CEO, Ricardo Casanova, the Mexican AMCC President, Luis Linares, the President of the Guatemala Simmental and Simbrah Association, Juan Francisco Flores, the Executive Secretary of EXPICA, Thomas Grupp of Bayern Genetic, Carlos Guerra of La Muñeca Cattle Co. and Cesar Cantú, the auctioneer, to help with the promotion on Facebook. For the first time ever integration was coming together in the cattle business and they understood it perfectly.

It was an enjoyable event, we did not have one single disagreement, we physically did it in a very interesting tropical setting provided by a great Hotel in Mérida, Yucatán, México called Hotel Casa San Angel.

Best Cattle Sales, powered by The Brahman Journal and owned by Victoria Lambert, did an extraordinary job. Their whole staff was very accommodating with all the different scenarios due to the inexperience we all had selling genetics through the internet on a digital platform to people we did not personally know in Mexico and Central America. There was no way in the world that bidders would give us their credit card number in order to bid. This is where personal relationships and trust come in handy and play a very important role in a sale like this one. I cannot tell you how many cattle people we talked to said they really did not understand how this was going to work, but trusted us, they would bid and settle their account later … and everyone did just that.

It’s amazing to see that many folks are still afraid of computers and yet they somehow managed to participate in the online sale. Some asked their grandchildren to do the registration process for them, other guys in Jalisco, México planned ahead and got together for a very good Mexican lunch, a lot of tequila, a good time, and asked their veterinarian to do the bidding while they watched on big screen TVs. Some other buyers only wanted to bid by phone because they preferred to talk to someone and confirm they had bought the animal they wanted, and other interested parties organized barbecues with their families and had a fun time watching the sale online.

Charity was a very important part of this sale, as it is for all the events we organize. We had seven lots of donated semen on a variety of breeds and the proceeds went to orphanages and homes for elderly people in very poor communities. It was heart-warming that we didn’t have to ask twice for donations.

The Brahman breeders that donated Brahman semen were Brandon and Rachel Cutrer of B.R. Cutrer, Inc. who donated ten straws of Mr. V8 372/8 “Boom Town” and Barry and Charlotte Smith of Bulls Eye Ranch, who donated five straws of +MR. BER CASH 336. The money from those sales went to Señor de Esquipulas, a Guatemalan orphanage. We thank them heartedly for their donation. 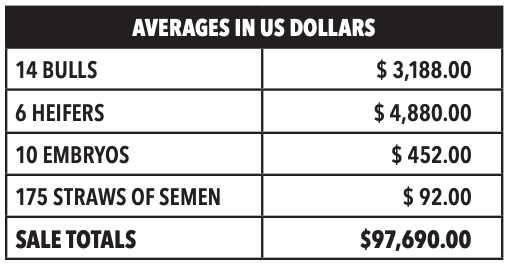 Not bad for a Sunday afternoon.