2016 ABBA PERFORMANCE BREEDER OF THE YEAR 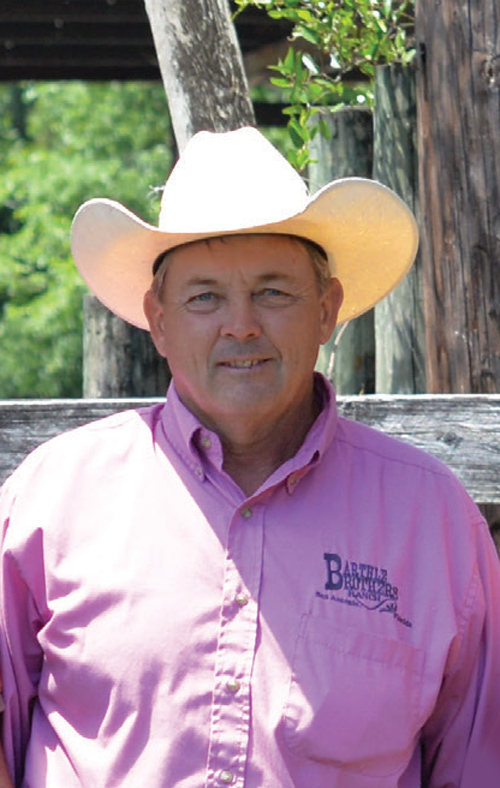 Larry Barthle of Barthle Brothers Ranch in San Antonio, Florida is the 2016 Performance Breeder of the Year.

The Performance Breeder of the Year award was designed to recognize an ABBA Member who successfully utilizes the ABBA performance programs in pursuit of improving the breed. Larry was chosen by the ABBA’s Research and Breed Improvement Committee.

“I am pleased and honored to win this award,” Larry said.

Larry has participated in a multitude of ABBA performance programs, including the Brahman Herd Improvement Records (BHIR), Carcass Evaluation program, the ABBA-Performance Tested Bull Sale and submitting ultrasound measurements and kill-data to aid in the association’s EPD calculations.

“The only way to know your cow herd is to measure,” Barthle said. “To be productive and improve, you have to know what’s in your cows. You can’t just visually look at them.”

Barthle Brothers Ranch is a multi-generational, family-owned agricultural operation that consists of more than 8,000 acres in Central Florida. The business includes hunting leases, guided Quail hunts, hay, registered Quarter Horses, a large commercial crossbred herd with a Brahman base and a registered Gray Brahman herd. Larry and his wife, Lynn, have been married for 35 years and have three children – Ben (wife Cameron), Chris (wife Sara) and Kayla as well as four grandchildren – Chloe, Marshall, Wyatt and Beau. They are longtime ABBA members and Brahman breeders with herd number 750. The family operation is run by Larry, his two sons, and his two brothers – Randy and Mark.

Larry has spearheaded the genetic development side of the cattle operation. The registered Brahman herd has been developed to prosper in the heart of Central Florida with the commercial bull market in mind. They strive to produce complete cattle with solid, across-the-board traits. The herd contains about 70 animals and is strategically culled based on data. All birth weights, weaning weights, yearling weights, hip height measurements and docility scores are recorded and reported to the BHIR program. They also utilize ultrasound technology to test all of their bulls as well as the ranch’s keeper replacement heifers.

“Our goal is to find consistency in cow lines,” Larry said. “Over the years, you can start to predict which ones will perform the best, but you are always looking to find out more, looking to find outliers or new bloodlines to incorporate back… But it can take four to six years when you try outside breeding to know if it really works.”

Productivity and longevity are attributes of paramount importance to the Barthle family.

In the past, Larry has assisted with the USDA STARS Subtropical Research Station in Brooksville, Florida by sending cows for donors. Their project was to develop a more fertile, productive, lower maintenance line of cattle, focusing on older, productive cows that were longer-lasting. He is also working with the University of Florida to find useful bloodlines to improve long-term productivity.

In addition to the registered program, the Barthle Brothers Ranch has a crossbreeding operation with approximately 1,100 head. It is a three-breed rotation system utilizing Angus, Hereford and Brahman bulls; and Charolais has been added as a terminal sire. The cattle are divided into three separate herds by breed type with the heifers moving on to another herd for crossbreeding, taking advantage of heterosis and utilizing the strengths of each contributing breed.

For most of the last 20 years, the ranch has retained ownership of its heavy Brahman-cross and culled purebred steers when selling semi-load lots in the fall that were deemed by buyers to have a discounted value and thus removed from the mix of sale steers. Retaining ownership has allowed the ranch to retrieve valuable carcass information, which it has contributed to the BHIR program. The steers have been fed several ways, including at a small feed yard they own in Florida; the King Ranch in Kingsville, Texas; and Texana Feeders in Floresville, Texas. At slaughter, there has been no discounted pricing because of breed type and performance. Premiums have been given for dressing percent, yield and quality grades.

In addition to producing animals with good carcass merit, animals in the registered herd have qualified for the BHIR Maternal Merit program as well as the Register of Renown. Over the years, several of the Barthle family’s younger members have shown cattle in open and youth shows; these animals brought home numerous championships and accumulated enough points to give two of the cows the coveted Vanguard distinction.

“Our cattle will thrive in the show ring and produce in the pasture,” Larry said.