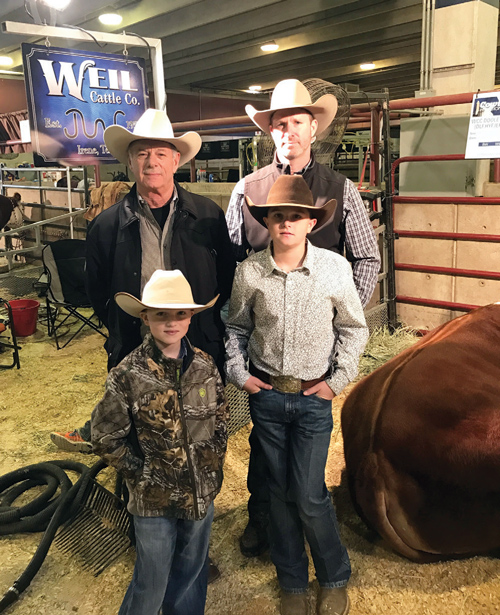 It is common knowledge that then association executive secretary Wendell Schronk founded ABBA’s F-1 Certification program in 1979. And obviously their recording secretary, Dinah Weil, played a key role in devising and implementing the system by which the cattle and their lineage were identified and recognized. But what slipped through the cracks of history was the actual birth of the idea.

During summer college breaks in the late sixties Jon worked for Thunderhill Ranch of Vaiden, Mississippi, the largest Polled Hereford operation in the U.S. at that time. While he was there they purchased a large herd of horned Hereford cattle and decided to breed them to Brahman bulls because polled and horned Herefords simply weren’t interbred back then. Ranch manager Barney Neergard got well known bid spotter, Fred “Hoss” Shaw to purchase ten bulls from one of McKellar Ranch’s early commercial Brahman bull sales in Mt. Pleasant, Texas.

Jon says those resulting calves were the first F-1s he had ever seen in significant numbers, and he was overwhelmed with the quality. “I once heard Dr. Bill Turner say the F-1 Braford cow is like adding 2 plus 2 and getting five,” he related, “And that was certainly my initial and continuing impression of the F-1 cross.”

The ranch and cattle were sold, eventually ending up in the possession of U. S. Sugar Corp., a large company with vast agricultural holdings and a world renown registered Brahman herd in Clewiston, Florida. They ran the Vaiden, MS. operation as U.S. Cattle Corp. and were one of the early pioneers specializing in F-1 females. They marketed some 1,000 head a year by auction and private treaty. Their auction sales were immediately considered “must attend” events by the elite commercial cattlemen of the day.

Jon’s expertise with proven F-1 breeding programs had cattlemen constantly seeking his help in locating “true F-1s” a redundant description that became increasingly necessary as the cattle skyrocketed in value; a phenomenon he immediately and constantly experienced as a cattle dealer.

“Unscrupulous traders constantly misrepresented F-1 cattle because from day one they outsold all other classes,” he explained. “I got so tired of driving and looking at cattle that were obviously not F-1’s that I probably vented a lot of my frustrations with my sister, Dinah, the recording secretary for ABBA. I told her that with their value someone ought to be identifying and authenticating the pure F-1.”

In addition to producing his own F-1s as Reputation Cattle Company, Jon also worked with and sold F-1 cattle to or bought F-1 cattle from many of the original pioneer breeders. His friends, contemporaries and customers included Bill Hoffpauer and Herb Myers who bought the Paret Ranch in Louisiana after they dispersed their Brahman herd, Chance Farms of Bryan, Texas, the Britten’s also of Bryan, Mayfair Ranch and Jim Theeck and of course. J.D. “Bubba” Sartwelle of Sealy, Texas with his Houston Livestock Show Commercial Female Sale, Louis Pearce, TAMU Research Center in Beeville, Texas, LSU, and Oklahoma State University.

Dinah told Jon he ought to talk to Wendell and set up the appointment. The two met in ABBA’s offices for a long afternoon, and Wendell immediately put a plan into motion that was as daring as it was original. As with all revolutionary ideas (and in the purebred cattle industry of that time this idea was revolutionary to the very highest degree) the right people were in the right places to see ABBA’s F-1 Certification Program come to fruition. Wendell and Dinah, with help from former recording secretary – Margaret Watkins, designed a system that would guarantee the genetics yet be simple and streamlined enough to fit into a commercial operation. Lee Berwick was ABBA’s president at the time. In addition to founding Delta Downs Racetrack, he was a longtime Hereford and Brahman breeder, a past president of the AQHA and a former university man. He recognized the program’s value, not only for ABBA, but for the cattle industry at large and had the political acumen to get it passed. It was the first ever of its kind, and to this day is still the most successful.

The ABBA F-1 Certification program is now an integral part of the association and its activities. Executive Vice-President Chris Shivers says that it generates approximately six percent of the total annual income. An annual national sale and separate national field day are held every year. ABBA also inspects and approves non-registered females for use in F-1 production. Jon said that he traveled with ABBA’s first field representative, Lee Pritchard, on many such trips.

This year’s sale will be the thirtieth. They were originally held at Port City Stockyards in Sealy but have recently moved to Caldwell, Texas. The field days have been in a wide variety of locations and have been hosted jointly by several other national or state breed associations.

Jon says that he has sold Reputation Cattle Co. F-1s and Brafords from Washington State to Florida and from Nevada to Virginia. The family (Jon, his son & daughter-in-law, Mac & Amy and their two sons) also runs a small registered Hereford herd that produces show calves for his grandsons Joe Mac and Jake Ray. “I recently found out that my paternal and maternal grandfathers were cattle dealers in Alsace-Lorraine, France before they immigrated to the United States. That means Joe Mac and Jake Ray are fifth generation cattlemen,” he proudly concluded. 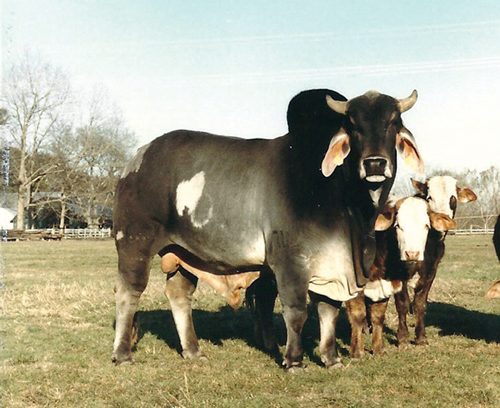 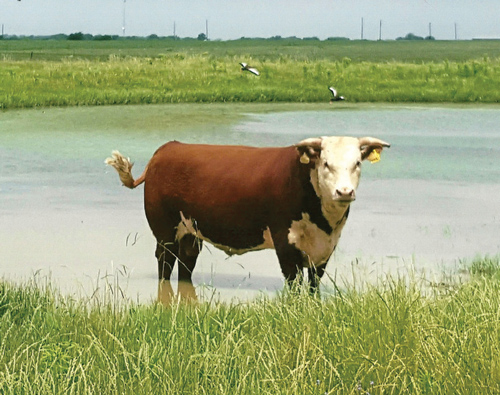