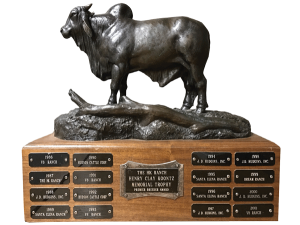 V8 Ranch of Boling, Texas will be awarded the HK Trophy at the 2016 ABBA Membership Meeting March 8 in Houston. This is V8 Ranch’s eighth time to win the prestigious award.

The HK Memorial Trophy is presented each year in memory of Mr. Henry Clay Koontz. This award was first presented in 1986 after the tragic death of Mr. Koontz who was a long-time breeder and promoter of Brahman cattle. The trophy is a bronze casting of the National Champion Bull, +HK Mr. America 61/9, better known as “Millionaire”. This bull had one of the biggest impacts on the Brahman breed of any bull in history. Each year this award is presented to the ranch or individual who accumulates the most points at the previous year’s International Brahman Show. An explanation of how the HK Trophy points are tabulated follows:

5.-Two points to each class winner.

7.-In case of a tie, one point will be awarded to the second-place class winner of both sex divisions.

8.-In cases of multiple owned animals, points will be evenly divided amongst all owners.