ABBA breeders have collected and submitted over 30,000 weaning hip heights over the past several years. This phenomenal dataset is now being used to create an ABBA Frame Score EPD which allows breeders to monitor frame size at a genetic level in their herd. At a heritability of 45%, this EPD can be used with confidence to make selection decisions on Brahman cattle.

There are known (and very apparent) genetic correlations between weight traits and frame score. We all realize that taller cattle tend to weigh more. However, these correlations between frame and weight are not used in the calculation of the Frame Score EPD. This is a conservative approach that forces frame score predictions to be based solely on frame score data. Furthermore, it does not automatically penalize an animal’s frame score EPD for weighing more.

Only hip heights and resulting frame scores collected the same day as a weaning weight are used in the calculation of the Frame Score EPD. If enough yearling hip heights or mature hip heights are collected, this data can be incorporated. But at this point, there is not enough data for those measurements to be useful.

The chart below shows the genetic trend for the frame score EPD. It’s clear from this chart that from 1980 to 2005, the average frame of animals increased. But after 2005, the breed appeared to enter a moderating phase on frame score EPDs. The average Frame Score EPD for animals born after 2017 was 0.14 with a standard deviation of 0.10. This means that 95% of the animals will be between -0.17 and 0.44 in their Frame Score EPD. Animals outside of those ranges could be considered extreme.

The ABBA Frame Score EPD is not a solution to every problem, but instead is one more tool that Brahman breeders can use to improve the performance and efficiency of their cattle. 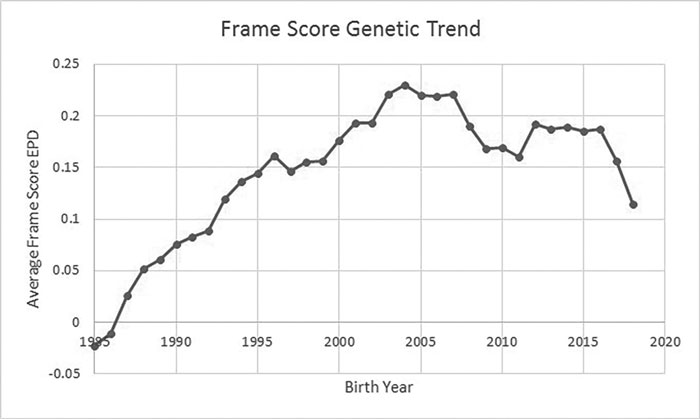