Performance Testing Your Bulls with a Focus on Feed Efficiency 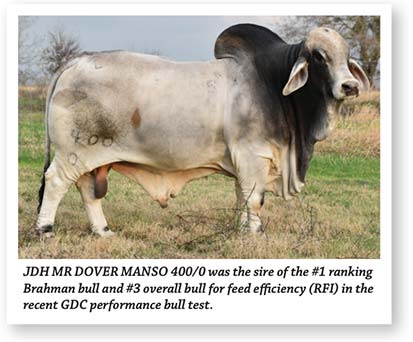 In every agriculture sector today, there is more and more importance being put on a reduced carbon footprint and increased sustainability. To stay competitive producers must learn how to use less resources to produce the same product. The beef industry, and agriculture in general, will become more challenging in the future as we will need to feed more people, with fewer, more expensive inputs, while reducing the impact on the ecology.

While performance testing cattle is not a new concept, it has become essential to remain competitive in today’s economic and ecologically aware environment. Performance testing is a “tool in the toolbox” which gives breeders more insight into their genetic decisionmaking process. For example, improved feed efficiency of beef cattle has the potential to increase producer profitability while simultaneously lowering the environmental footprint of beef production. So, breeders who performance test their animals should have a better understanding of which genetics in their herd will be more efficient, and hence bring more value to the bottom line.

While some breeders may still think they can gauge their cattle’s performance with a “trained eye”, more progressive breeders understand they must utilize newer technology in order to be efficient and profitable. Instead of taking years to determine which cattle are top performers in their herd, producers can use genetic testing and reduce the time to make decisions about the performance of their cattle.

ST Genetics at their Genetic Development Center has all the latest technology in order to provide cattle producers with relevant and usable data that will bring added value to their program. With the use of ultrasound, fertility testing and feed efficiency testing, producers can accurately measure which cattle to keep in their herd and which cattle they should cull.

“I have been sending bulls to the Genetic Development Center tests for a few years now,” explained Michael Goudeau of J.D. Hudgins-Goudeau Division. “It helps when a buyer comes to look at bulls to be able to provide as much information as possible about the potential of a bull’s performance impact on their existing herd.”

While the Genetic Development Center (GDC) has tested thousands of animals from 22 different breeds of cattle since 2012, ST Genetics itself has tested more than 500 head of Brahman cattle, both bulls and females, that have been in the ST Genetics herd. ST Genetics is well known for their performance bred Brahman cattle with exceptional genotype and phenotype.

One of the tools GDC uses in their performance tests is the GrowSafe system to individually evaluate and measure each animal’s intake. GrowSafe’s data platform is a fully integrated system providing physical sensing, predictive analytics and cognitive computing. The data collected during the GDC’s tests give producers new insights, enhancing decision making and ultimately helping producers optimize profit on their operations.

“When Brahman breeders talk about how great Brahman cattle are for Average Daily Gain (ADG) I have to disagree,” explains Gustave Toro, Director of Beef Support Services ST Genetics. “We have found in our testing that Brahman cattle do not do well when their ADG is compared to other beef breeds. But when you look at feed efficiency (RFI) this is where they really excel. This is where Brahman breeders have something to really talk about the benefits of their breed to the beef industry.”

According to the Beef Cattle Research Council, improving the feed efficiency of a herd can mean big savings for producers. A 5% improvement in feed efficiency could have an economic effect four times greater than a 5% improvement in average daily gain (ADG). Since feed costs represent greater than two thirds of total production costs in a beef operation, reducing them can have huge advantages to your bottom line. This information isn’t only for the feedlot and backgrounding operation. It is especially true for the cow-calf producer because over 70% of those feed costs are going towards just maintaining the cows over the majority of the year.

In the most recent GDC performance test from the summer of 2019, there were 261 animals in the test with 82 Brahmans from four different breeders included in the testing. There were 5 other breeds beside the Brahmans in the test. Within the results of just ADG, there was not a single Brahman to rank in the top 50. But when the results are sorted by feed efficiency (RFI), there were 10 Brahmans to rank in the top 25. Of those the Goudeau bred bulls did very well, with a JDH MR DOVER MANSO 400/0 son ranking #1 in the Brahmans and #3 in the entire test of 261 head for feed efficiency (RFI).

At the GDC they have developed a multi trait efficiency index that is important in the results of the test. Goudeau bred bulls, sired by such well known sires as JDH MR DOVER MANSO 400/0, JDH MR CRUSH MANSO 240/0 and +JDH CHARLEY’S JAZZ 946/1 also excelled in this index.

“I was very pleased with the performance results of our bulls in the last GDC test,” explained Goudeau. “With the data and information I have gained from the last few years of testing I have facts which help me focus on genetics that are the most efficient in my herd.”

Being able to give customers information about the cattle they are buying with regard to efficiency is more important every day. While buyers still want cattle that have eye appeal, they also need cattle that will perform. Since there is tremendous potential to improve feed efficiency through genomics and genetic selection, collecting data concerning this trait, as well as other performance traits is essential.