View the ABBA 2017 Spring Trait Leaders in PDF format as seen on brahman.org

The following trait leader information was provided by the American Brahman Breeders Association. Contact the ABBA office for a printed sire summary or visit the BrahmanJournal.com to view this document as a PDF. Also, if you have any photos we are missing on any of the top trait leaders please e-mail them to info@brahmanjournal.com and we will add them to our online version.

The following sires are the 2017 Spring ABBA Trait Leaders for Maternal Birth Weight, Birth Weight, Weaning Weight, Yearling Weight, Milk, Scrotal Circumference, Hot Carcass Weight, Ribeye Area, Marbling Score, Adjusted 12th Rib Fat Thickness, Percent Retail Yield, Warner Bratzler Shear/Tenderness and Docility. In order for a bull to be recognized as a Trait Leader he must have met the specific requirements set forth by the American Brahman Breeders Association. First, only bulls that have the designated accuracy for the specific trait are considered. Once the sire has met the accuracy requirement he must be within the top 20 of the breed in the respective trait and have had at least one progeny registered within the previous two years.
This process is many times misinterpreted as simply listing the top 20 bulls for a trait however, only proven bulls are able to be considered as Trait Leaders. When using EPD’s as a tool to help in the sire selection process it is important to remember to select a balanced bull with acceptable ranges for all traits rather than selecting a bull for one desired trait as this can yield a less than optimum outcome.
Traits included for carcass trait leaders are:
1. Hot Carcass Weight (CWT): Measured in pounds after slaughter and before chilling.
2. Ribeye area (REA): Measured in square inches on the longissimus dorsi muscle at the interface of the 12th and 13th ribs on the ribbed carcass after chilling.
3. Marbling Score (Marbling): Intramuscular Fat (IMF) : IMF EPDs reflect differences in intramuscular fat (marbling score) based on actual carcass measurements of harvested progeny. Breeding cattle with higher IMF EPD’s should produce slaughter progeny with a higher degree of intramuscular fat and therefore higher quality grades.
4. Adjusted 12th Rib Fat Thickness (FAT): Fat depth in inches was measured on each ribbed carcass and was adjusted according to USDA guidelines for the presence or absence of fat in other parts of the carcass.
5. Percentage Retail Yield (Retail): The percentage of boneless, closely trimmed, retail cuts from the round, loin, rib, and chuck of each carcass and was computed with the following formula: 65.69 -(9.93 Adjusted 12th Rib Fat Thickness, in.) -(1.29 Percent Kidney, Pelvic, and Heart Fat) +(1.23 Ribeye Area, sq. in.) -(0.013 Hot Carcass Weight, lb.)
6. Warner-Bratzler Shear Force (tenderness): Warner-Bratzler shear force is a measure of tenderness. A 1 inch-steak was cut from a primal rib of each animal, aged for 14 days at 35.6ºF, and cooked on an electronic grill to an internal temperature of 155ºF (medium doneness). After cooking and steaks had cooled to room temperature, six to eight cores (1/2 inch in diameter) were removed parallel to fiber orientation from each steak. Peak shear force (lb of force required to pull a dull blade through a core) was measured on each core using a Warner-Bratzler shearing device. Warner-Bratzler shear force for each 14-day aged and cooked steak was evaluated as the average of shears from these six to eight cores.
Interpretation & Usage: An EPD is an estimate of a bull’s transmitting ability. Transmitting ability for a given trait is 1/2 of the sires breeding value for that trait. Expected Progeny Differences have relative, rather than absolute value. They should be used to compare bulls within the breed rather than as “stand-alone” values.
Example: Bull X: Carcass Weight EPD = 17 lb.
Bull Y: Carcass Weight EPD = -3 lb.
We would expect that when managed under similar conditions the average carcass weight of a large number of progeny of Bull X would be 20 lb greater than the average carcass weight of a large number of progeny of Bull Y.
The accuracy of an EPD is a measure of how well the EPD estimates the transmitting ability of a sire for a given trait. Accuracy has a possible range from 0 to 1. Accuracy is higher for sires that have greater numbers of progeny with data. Possible change values (PCV) are associated with accuracy values that allow “bracketing” an EPD to an interval with a given amount of confidence. Higher accuracies have smaller possible change values, and therefore a tighter confidence “bracket” for the EPD.
Example: Bull A has a ribeye area EPD of 0.1 sq in with an accuracy of 0.5. From the possible change values table on the ABBA website, the possible change value associated with 0.5 accuracy is 0.36. Therefore, there is a fairly high probability (~ 68%) that this bull’s true transmitting ability (EPD) for ribeye area is somewhere between:
EPD – PVC = 0.1 – 0.36 = -0.26 & EPD + PVC = 0.1 + 0.36 = 0.46
Confidence “brackets” for other accuracies of traits can be calculated in a similar manner.
Trait Leaders: Trait Leaders for the respective traits were determined by ranking the EPD from lowest to highest for adjusted 12th rib fat thickness, Maternal Birth Weight, Birth Weight, Warner-Bratzler Shear Force and from highest to lowest for the remaining traits. 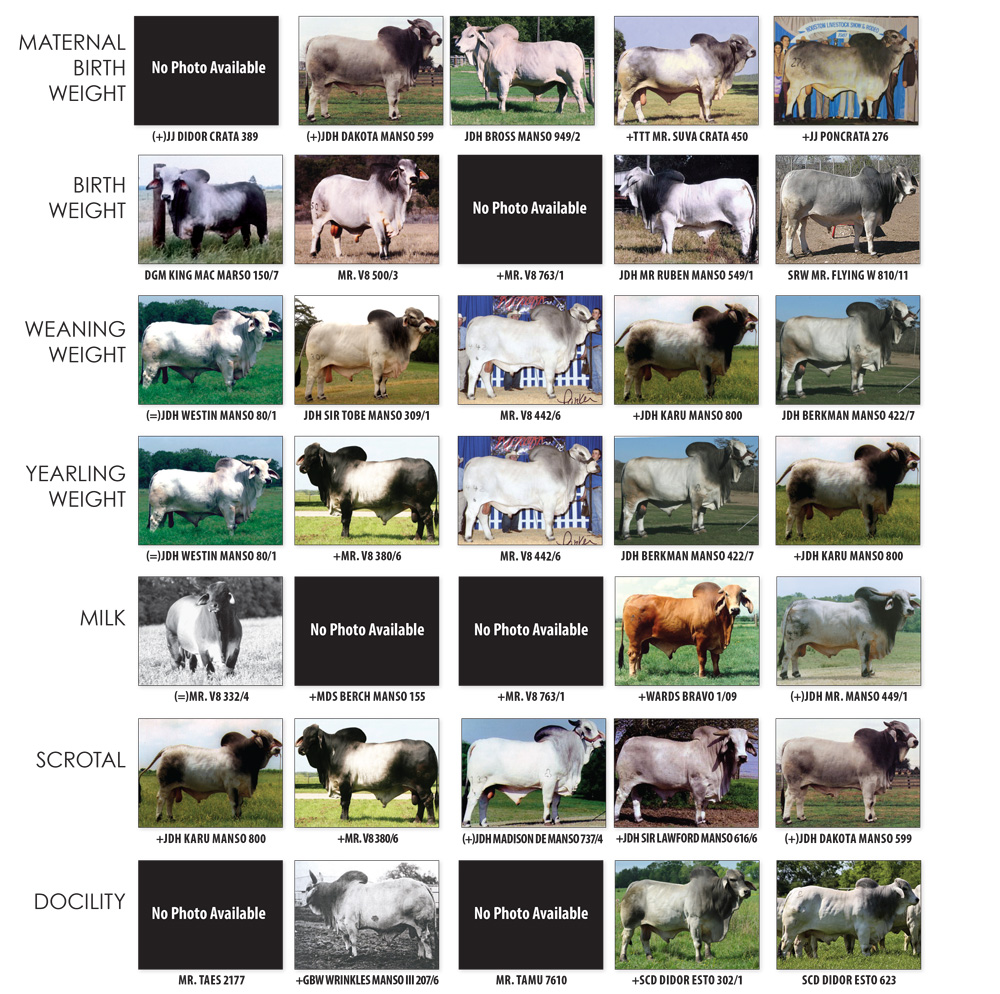 From the Desk of the ABBA Executive Vicepresident