More than 170 registered buyers considered the top-quality offering of ABBA Golden Certified or Certified F1 females, registered and purebred Brahman females, Hereford females, and breeding-age bulls. The sale was broad cast live online with Cattle in Motion and attracted 75 online registered buyers who were active bidders throughout the entire sale.

In the exposed offering, a large group of 140 head of Golden Certified and Certified F1 Hereford x Brahman females exposed to Angus bulls averaged $2,419 per head. The high selling pen sold for $3,400 each, which were consigned by John Malazzo Farms.

The open F1 Brahman x Hereford females averaged $1,664 each with the top pen from Rolling Oaks of Milano, Texas selling for $2,600 each.

A high demand for Brahman females was evident as the winning  pen of open Brahman females from Bar W Ranch of Devine, Texas, brought $4,950 per head. The open Brahman females averaged $3,357 per head. A special consignment in this sale was a pen of registered open Hereford heifers from Weil Cattle Company with 8 units of sexed female semen on HK Visa Volunteer 224. This pen sold for $2,650 each.

In appreciation to the many years of support to not only the ABBA National F1 Sale, but also the Brahman and commercial cattle industries, the sale was dedicated to longtime F1 producer Robbie Hamilton of H&M Cattle Co. From the inaugural ABBA National F1 sale in 1988, H&M Cattle Co. of Wharton, Texas, has consigned cattle every year. Hamilton also consigns cattle to the prestigious stock show sales in Fort Worth, San Antonio, and Houston.

The official averages for the 2018 ABBA National F1 and TBA Brahman Female Sale are as follows: 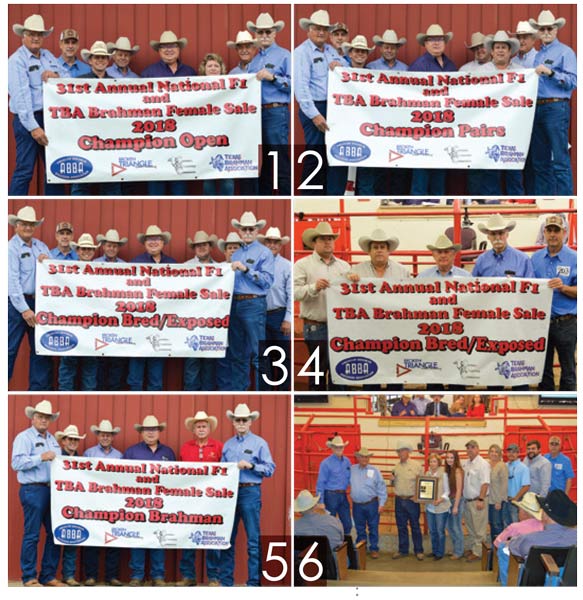