The 40th Annual Carolinas Brahman Breeders Association Sale was held in front of a standing room only crowd of over 400 people at the Laurens Livestock Barn in Laurens, South Carolina on June 13, 2020. Philip Gilstrap, owner of P & G Auction Co., was the sales manager. He was excited by the support of not just the buyers, but also of all the consignors and internet bidders.

“I have attended this sale since I was a little kid and I have actually been at all 40 sales, though clearly not as the auction manager,” joked Philip. “We had planned for all kinds of fun events to celebrate the 40th Anniversary of the CBBA this year. All those plans had to be changed due to the COVID 19 pandemic. Not only did we have to cancel the big Junior Show we had planned, but we also had to change the location from the Clemson University facility to the sale barn in Laurens.”

Philip has a tremendous support team and received a lot of help from his wife, Jennifer. Matt and Whitney Pounds of 2 Diamond P Cattle were at the sale to do whatever Philip needed help with as well as CBBA members who pitched in to help make the sale and association fund raiser a big success.

Back in 1980 at the first CBBA sale breeders from the Carolinas, Virginia, Georgia and a few from Tennessee were involved in the sale.

Now that group has grown and on sale day you found breeders from all over the USA that brought cattle to sell and also were attending the sale to buy cattle. There were even over 2000 breeders watching the sale online and even bidding online.

“It was really great to see all the breeders from around the USA bidding on the cattle,” explained Matt Pounds. “I really enjoyed talking the pedigrees of these cattle during the sale. To see these cattle purchased by buyers in South Carolina, North Carolina, Georgia, Florida, Alabama, Mississippi, Texas, Tennessee and Virginia makes you realize the demand for good quality Brahman cattle is still strong even during these trying times.”

The sale was held live and was also online at Best Cattle Sales. There were a number of bidders from numerous states that took advantage of the online platform.

One consignor had a really long trip to be able to attend on sale day. Shortly after Jason McMullen of JM Cattle arrived with his cattle in North Carolina he received a call that he did not expect. Jason is from Florida and had just driven about 500 miles to deliver and prepare his cattle for the sale.

“So I was two states away from home and I received a phone call from my wife Jessica that my daughter Kylee was at the doctors,” explained Jason. “She had appendicitis and was headed to the hospital to have surgery. I headed back home so I could be at the hospital with them. Kylee did great and was released the next day. Then I turned around and drove back to South Carolina for the sale. In those two days I drove about 1500 miles or so. I had tremendous support from all our friends and Brahman family as everyone was calling and texting to check on us. We are really blessed and humbled by the outpour of support we received.”

The high-selling bull lot was consigned by Terry McPherson of Tiara Farms of North Carolina. This lot sold to Mike Mitchell of Mississippi for $6000.

Make plans to attend the 41st annual CBBA sale next year on June 12, 2021 which is the second Saturday in June. 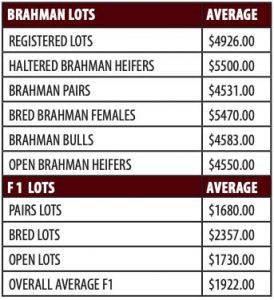