At the 2020 ABBA National Show held in Shreveport, Louisiana November 3 to 7, the second-ever Marsha Swaner Perpetual Trophy Award was awarded to Detering Red Brahmans of Hempstead, Texas. This honor is a new award bequeathed to the National Grand Champion Red Brahman Female each year. 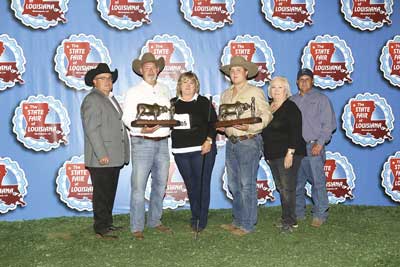 This trophy is dedicated to the late Marsha Elaine Swaner of Swaner Brahmans, who passed away January 1, 2019, after a strong and courageous battle with kidney disease.

Since the 2019 trophy was unavailable for presentation during last year’s National Show, there was a presentation of the 2019 and the 2020 trophies this year on the backdrop.

This award has a large perpetual trophy that is on display at the ABBA office with every winner’s information inscribed on the base. Then, the winner of the award each year receives a duplicate of the trophy to proudly display in their trophy rooms and cases.

Brahman Operations with the Most Registrations

Brahman Operations with the Most Registrations