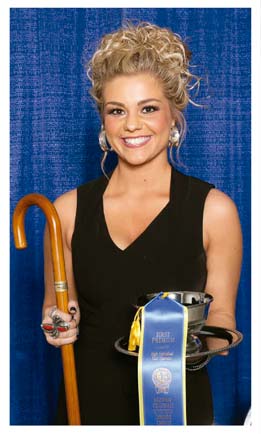 In November of 2019 college students from around the country gathered together at the North American International Livestock Expo in Lousiville, Kentucky, to anxiously await the results from the 114th National Collegiate Livestock Judging Contest. In a clean sweep of all species and reasons, Oklahoma State University clinched the title for the third year in a row.

Recognized as the High Individual Overall in the 2019 contest was Kylie Patterson of Texas. Patterson is a former ABBA Queen, All Around Champion at the All American and a Scholarship Award winner from the Brahman Association. Patterson is only the ninth female to have won this award since the inception of the contest.

When asked why Patterson became a livestock judge in college she explained, “My parents, Lorie and Danny Kempen, instilled a strong passion for the livestock industry in me at a very early age.” She went on to explain, “I had someone very near and dear to me early on tell me that livestock judging was not for girls, and regardless I wouldn’t have a big enough last name to make it anyway. So, it was only natural for me to want to pursue the love I had for the game at the collegiate level, prove that person wrong, and push myself and my abilities as far as I could go. The fact that I not only won Louisville in Junior and Senior College, but was also the 9th woman to ever win the Senior College event means more to me than I could possibly try to put into words.”