The demand for F1 replacement genetics was high, despite the current markets. More than 50 breeders from Texas, Louisiana, Oklahoma, and Arkansas consigned nearly 800 head of cattle to this year’s sale. Buyers represented Texas, Louisiana, Arkansas, and Georgia. More than 150 registered buyers were in attendance, and the live sale broadcast with Cattle in Motion had 180 viewers and active bidding throughout the entire sale.

The sale was dedicated to Graham Land and Cattle for Dr. Charles Graham’s commitment and dedication to the industry, specifically the Brahman influenced commercial industry.

For many years, with their help, the Brahman breed dispelled unwarranted untruths and prejudices by demonstrating the positive attributes of the breed and of its abilities and contributions to the beef industry. Specifically recognized are the owners of Graham Feedyard, Charles W. and Tyler Graham, General Manager Jay Gray, Yard Manager Maurice Janda, and Financial Director Josh Gray.

The sale management team would like to give special thanks to the corporate and gold sponsors, as well as the many silver and ranch sponsors that made this sale possible. 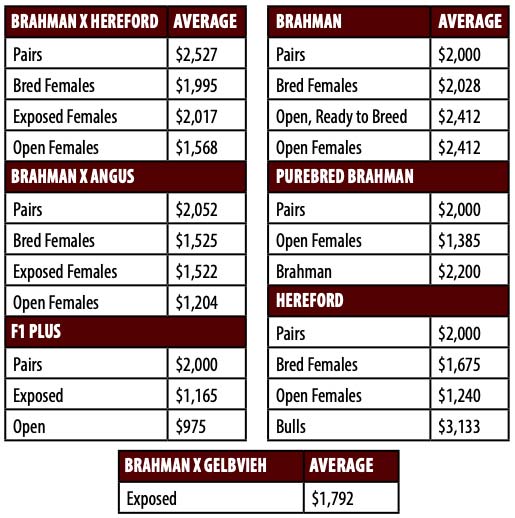