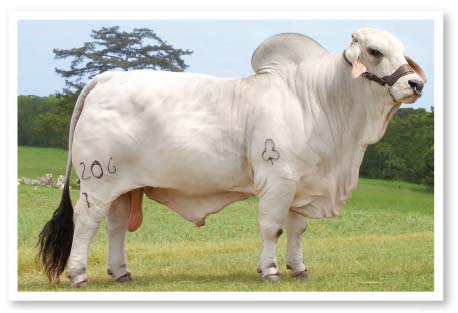 Receiving the “Vanguard” designation in the ABBA is the most prestigious accomplishment a Brahman bull can achieve. Vanguard status is indicated by the symbol (+) preceding a sire’s name in the ABBA registry.

A Vanguard bull is a sire that has earned both Register of Renown and Maternal Performance Sire status. Not only have these bulls produced progeny that garner championships in the showring, they have also sired multiple Maternal Merit cows. Dams with the Maternal Merit rank are superior females identified through participation in the BHIR program as having an early onset of puberty, a regular calving interval and consistently producing offspring that perform above average.

In the history of the breed’s registry, only 25 bulls have obtained Vanguard status. The most recent addition to this esteemed list is (+)JDH WOODSON DE MANSO 206/7.

“His offspring have done extremely well throughout Latin American and Thailand,” Bill said.

So far (+)JDH WOODSON DE MANSO 206/7 has produced four Maternal Merit daughters for the Hudgins herd with two being inducted this year.

“We are retaining a lot of Woodson daughters as they are really good milkers and calves with him in the third-generation spot have had large weaning weights,” Neil Hudgins said.

(+)JDH WOODSON DE MANSO 206/7 has left a big mark on the Brahman breed in a very short time. Be sure to keep an eye out for his offspring as they exhibit at the International Show this year!

V8 Ranch will be awarded the HK Trophy at the 2019 ABBA Membership Meeting at the Houston International Show.

The HK Memorial Trophy is presented each year in memory of Mr. Henry Clay Koontz. This award was first presented in 1986 after the tragic death of Mr. Koontz who was a long time breeder and promoter of Brahman cattle. The trophy is a bronze casting of the National Champion Bull, +HK Mr. America 61/9, better known as “Millionaire”. This bull had one of the biggest impacts on the Brahman breed of any bull in history. Each year this award is presented to the ranch or individual who accumulates the most points at the previous year’s International Brahman Show.