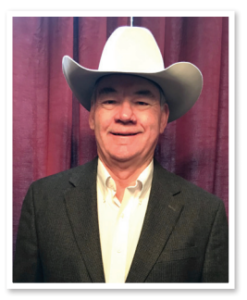 Schronk was part of the ABBA staff from 1974 to 1994. In 1976 the ABBA was dealing with some growing pains and the board knew they needed to fill a recently vacated Executive Vice President position. They asked Schronk, a 25-year-old Central Texas native who had been the director of communications for ABBA since 1974, to step into the vacant position of Executive Vice President.

During the years Schronk was Executive Vice President he was able to grow the association to the largest it had ever been. He had a positive impact on everyone who ever had the chance to meet him. It was easy to see that he truly loved the Brahman breed and found a family within the ABBA breeders.

“The greatest part of my job was the love and dedication of the people I interacted with,” Schronk expressed. “Especially all the support they gave to me and my family.”

Schronk was an implementing force for the F1 Certification program. The program began in 1979, as Schronk believed F1 certification papers would help F1 cattle be sold at a premium price. To honor his dedication to the F1 cattle, the ABBA National F1 Female sale was dedicated to Schronk after he retired.

“I have nothing but high praise for Wendell,” past ABBA president Dr. Richard Forgason stated. “He was progressive and an entrepreneur of ideas. He could come up with an idea, run it by everyone to get feedback, gather information, and then present it to the board for approval.”

His dedication to the industry is one of the many reasons Schronk worked to start the history book, The American Brahman. This book had been attempted twice before and Schronk had been told many times it was too controversial of a task to complete. Schronk understood the importance of this book and created a committee that could work together and preserve the history for generations to come. This committee took to the project like a candle to a flame and was able to make this book a reality.

“I was very lucky to hire some amazing employees that were very talented and they made my job easier,” Schronk explained.

Knowing the history of the breed was very important to Schronk, but he knew the breed also needed to be modernized to keep up with the times. Schronk started computerization of the associations records and initiated a sire summary. Even though this project of the records took three years and lots of manpower, the office found pride in this work since their system for maintaining registrations was the best livestock registry at that time.

“The last twenty-five years of the twentieth century Brahman and the name Wendell Schronk were synonymous in the United States and around the world,” Dinah Weil, ABBA Recording Secretary from 1976 to 1989, explained. “Wendell’s knowledge, leadership and mastery of the Brahman breed and its followers is now a part of history. It was a privilege to share 13 years of teamwork at the American Brahman Breeders Association with Wendell.”

Throughout his time at the ABBA, Schronk never forgot the organization and members he represented.

“Wendell spent 20 years with the association and gave so much over those years,” Joe Mask, PhD, current Executive Vice President of ABBA stated. “We saw so much progress in his term and having the show dedication to him means a lot to ABBA and how far we have come.”

In 2010 Schronk was inducted into the ABBA Hall of Fame to forever memorialize the dedication and love he has for the breed and its people. Schronk looks forward to attending this year’s International show and hopes to see fellow friends and Brahman breeders. The international show holds quite a few memories for Schronk and his family. He is excited to have both of his children with him at this show when he receives this dedication